Part of the thrill of diving is encountering marine animals in their own environment. Sea turtles frequent the waters off Jupiter, Florida between March and October when they return to the Palm Beaches to breed and nest.  We’ve already shared information on leatherbacks and loggerheads. Today, we’re going to take a look at the green sea turtle.

How to identify a green sea turtle

Five species of sea turtles can be found in our area, and all are considered endangered. The three most abundant species are the loggerhead, green and hawksbill. Less abundant are the leatherbacks and the Kemp’s Ridleys. So with five species swimming around, how do you tell which one is a Chelonia mydas? 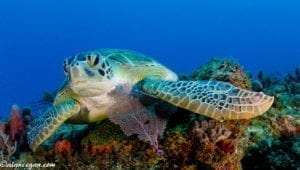 Surprise! They’re green. Simple, right? Now let’s up the degree of difficulty and lower the visibility. Fear not. There are a couple of other clues to help you identify this species:

Green sea turtles are found in all subtropical and tropical seas.

The Role Sea Turtles Play in the Ecosystem

Ecosystems are complicated.  They are biological communities of interacting organisms and their physical environments. Effecting one organism in the system usually creates changes in the rest of the system. Sea turtles spend most of their lives at sea, but they come onto land to nest. Therefore, their activity contributes to marine, beach, and dune ecosystems.

First, let’s look at the ocean. Near shore, sea grass beds support a diverse ecosystem. Sea turtles graze on sea grasses, which not only helps the grass thrive, but when digested by the turtles, the eliminated nutrients from the grasses are returned and used by other organisms.

A bit further out are the coral reefs. Here, the hawksbill sea turtles take center stage. Their diet consists mainly of sponges. If the sea turtles disappear, the balance on the reef changes and the sponges would likely squeeze out the corals. Not good.

Leatherbacks are a diver’s best friend. One of the few marine animals that feed on jellyfish, they help keep that population in check.

If we head onshore to the beach and dunes, we’ll find a lot of sand and a low-nutrient system with sparse vegetation. But it is precisely that vegetation that prevents beach erosion. As mentioned in the loggerhead post, female sea turtles will often nest between three and seven times, and can lay between 50 and 200 eggs at a time—each season. Not every egg hatches. Those that don’t provide needed nutrients in the ground and promote more vegetation.

Sea turtles are valuable members of the world above and below the water. As a diver, you have the ability to see them in both locations.  Ready to book a dive charter?