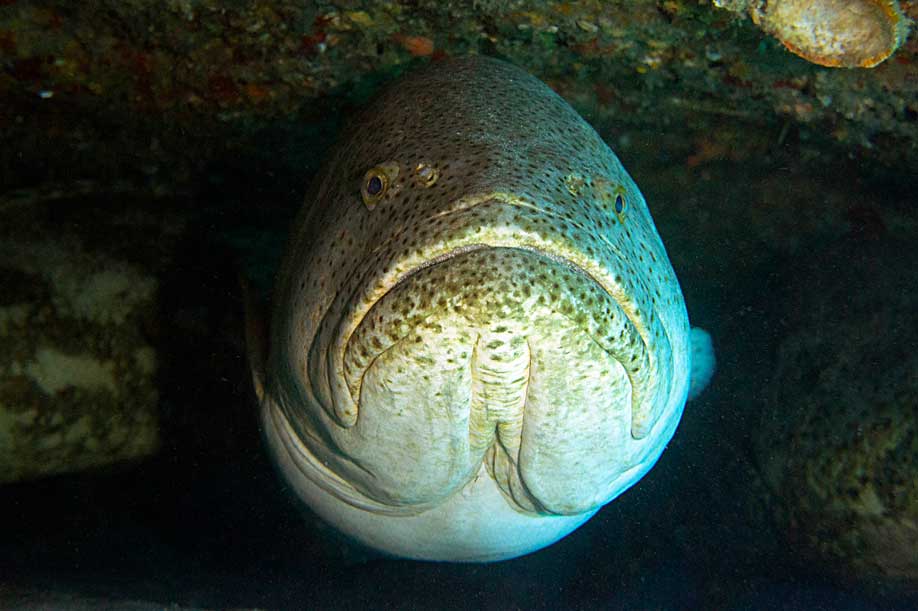 Jupiter Dive Center is located in northern Palm Beach County in Southeast Florida and is home to some of the World’s Best Diving and big animal encounters around. Nearby reefs have an abundance of tropical and temperate water hard corals, sponges, and other marine species. You will create lasting memories while exploring reefs, ridges, and wrecks.

You hear – and feel – a booming resonance. You’re sensing the signature low frequency bellowing of Goliath groupers. Then you are in the midst of underwater titans up to eight feet long and weighing more than 500 pounds. It’s an unforgettable big-animal dive experience. The offshore reefs of Jupiter, Florida host a year-round population of these gentle giants. In late summer, several intentionally sunk ships host spawning aggregations of the largest grouper in the Atlantic. You’ll be diving the only known spawning site for this protected species on the U.S. Atlantic coast. Viewing up to sixty of these behemoths at once is a bucket list dive not to be missed.

Jupiter Dive Center can put you in an aggregation of Lemon sharks during the months of January and February.

Spring and early summer bring large numbers of sea turtles for mating and laying eggs. The first species to arrive in March is the world’s largest sea turtle, the giant Leatherback. Loggerhead sea turtles arrive in April. Jupiter and its surrounding communities is the second largest nesting site in the world for this species. Diving among these photogenic giants is a real treat. In early summer, Green sea turtles arrive to mate and lay eggs on the nearby beaches. And Hawksbill sea turtles with their golden brown translucent shells can be seen year-round. If you’re lucky you’ll see four of the world’s eight species of sea turtles during your dive vacation.

Jupiter Dive Center is steps away from two spacious 40 foot dive boats docked at its back door. Everything is on site at Sawfish Bay. You’ll be geared up and on the go quickly and easily. The offshore reefs are a quick 25-minute boat ride from Jupiter inlet.  During drift dives the Gulf Stream’s current does all of the work.  You simply float along the reef line or dive into a wreck following an experienced guide. Nothing could be easier.

Call 561-745-7807 or visit Jupiter Dive Center dot com for the exciting details on this big animal mecca. Then book the dive trip you’ve been longing for. Year-round diving adventure is waiting for you.

Go to our online store and purchase a Trip Card and receive a free dive.

Next Staying Warm While Diving Dry